Craft beer drinker and travel adventurer Red Hunt takes a much awaited trip to Parry Sound, Ontario to sample the ales and fairways. 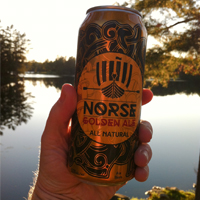 My novel cottage country trip began when I headed north from Toronto and took a left at the fork in the road towards Highway 400 and Parry Sound instead of towards the more popular Highway 11 to Muskoka, where the two highways diverge in Barrie.

This lesser-traveled path turned out to be an epic craft beer and golf adventure in Parry Sound, where the most prominent trip feature was the laid back, casual atmosphere you’ll experience on the shores of Georgian Bay. This is cottage country fun on cruise control, where you can sit back and enjoy the incredible landscape that’s carved out of wind, rock, tree and sparkling waters, day in and day out.

Norse Brewery –  A Must-Visit in the “Parry Sound Suburbs” 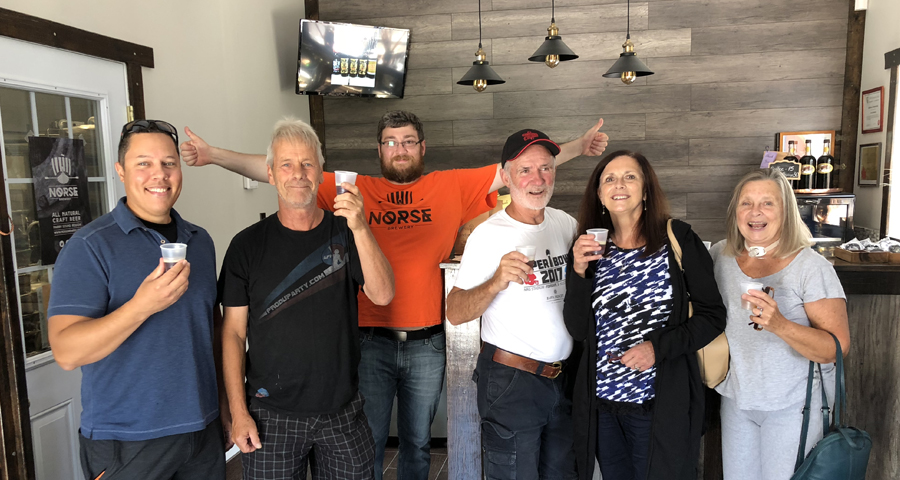 A stone’s throw away from the highway, Norse Brewery is perfect for anyone heading to parts north of Parry Sound, including Nobel, Britt and Byng Inglet. It’s also a good place to stop and stock up if you are heading to a local campground that permits alcohol (and their cans are great for this). 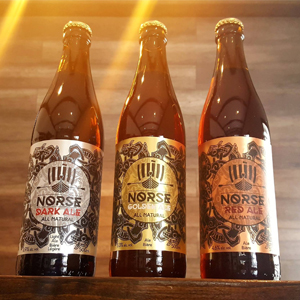 What surprised me most at Norse Brewery was their commitment to quality and community. Working off a 20bbl system, Norse Brewery has spent the past year and a half perfecting their three original recipes – a Golden Ale, Dark Ale and Red Ale.

Pure, all-natural ingredients are used and it is evident in the crisp and clean taste of each of their brews. The Dark Ale in particular achieves a somewhat bold, dry roasted flavour profile while only clocking in at 3.9%.

Talking with owner Elena, I learned that Norse Brewery is a four-person, family-run operation. This business works well for supporting the local community as you quickly discover event notices for other nearby small businesses. Whether it is hosting a “Pints for Paws” event with the Spears & Shears Pet Expo, helping to promote the Whispering River Orchestra or other local businesses like delicious maple syrup and coffee, it seems the good people at Norse Brewery know everyone locally and are pleased to collaborate. 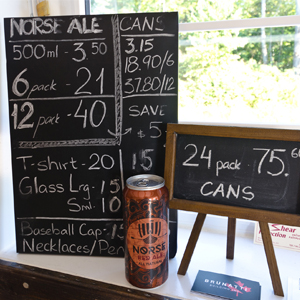 Currently featured in 20 or so bars around Ontario, they are slowly starting to distribute further afield.  But outside of the True North Beer Festival events this past summer, it may be hard to find their beers without making the worthwhile trip to Parry Sound.

While I was there, some local farmers stopped by Norse Brewery to pick up spent grains for their cows and pigs during my visit. You hear about this from many breweries, but to see how appreciative and happy these farmers were to get some tasty feed for their animals was a nice way to cap off a visit.

While Norse did brew a Sour IPA with Belgian chocolate once, they don’t have any plans to add new beers to the current lineup. Sure, something might pop up when they have some time, but for now their plans are to slowly get into more bars and restaurants around Ontario, and to keep supporting local community events.

Trestle Brewing Company – A Big Space for Some Bold Beers 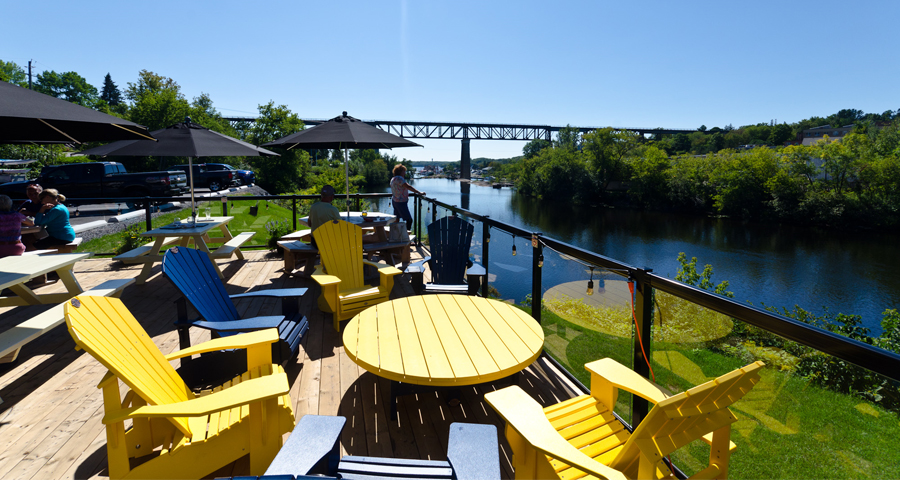 The biggest surprise at Trestle Brewing Company was the sheer size and scale of the brewing facility. There are going to be a lot of great beers being pumped out of Parry Sound in the coming years. 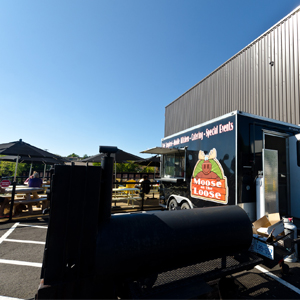 A beautiful location, with a stunning patio that looks out towards the water and the iconic trestle bridge in Parry Sound, it is hard to think of a better brewery setting.

If the beauty of Norse Brewery was in their subtle ways, Trestle Brewing is about being bold.  Every beer I sampled was flavourful and on-style.

A small, but tasty menu is available at Trestle, which also had a Moose on the Loose food truck churning out tasty treats during my visit (be sure to check out their Facebook page for seasonal hours to avoid disappointment).

Open and airy, with very friendly staff, you can tell people enjoy working at Trestle, as everyone was smiling. Room for 12 taps, and a nice bottle shop for growlers, cans and merchandise, there is still a “newness” to the facility. 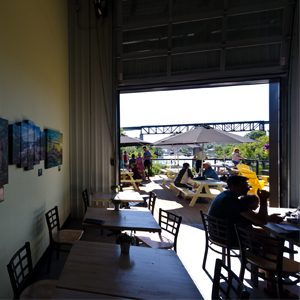 Most of their beers you’ll only find at the brewery, such as the Red Rock Rye Porter, a great introductory beer for people who may not usually drink darker beers. On a sunny day, their South Channel Session beer can easily entice you to sit out on their patio and drink all day.

Expect the tap list to change frequently, so you’ll be guaranteed a seasonal or special small-batch brew on your visit. When we stopped in the brand new Hole in the Wall Helles was just released, some of the brewery staff hadn’t even tried it yet! It hit the spot, a perfect late-summer and autumn beer.

Another fine surprise at Trestle Brewing Company was learning how they intend to use their space in coming months as patio season ends and we’re all lured inside. Talking to one of the friendly servers, music and trivia events are destined to become popular draws.

Their event listing is something to keep an eye on too since a lot of talent always seems to keep popping up on the event schedule – local beer and local music? You can’t go wrong!

Two fantastically contrasting breweries in the Parry Sound area, each worth checking out!

The Patio at Glenn Burney Lodge 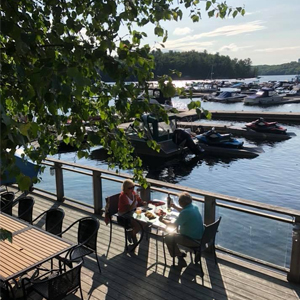 This place is kind of tricky to get to for out-of-towners; the lodge itself burned to the ground a few years ago, but the patio on the property is a big hot spot in the warmer weather. The trick is to park in the upper lot near the marina and walk down a little side path and steps (so it’s not for those who don’t want to walk a bit).

Get yourself there for an early dinner or late lunch and enjoy a few drinks while taking in the amazing sunsets. I arrived just after sunset – amateur mistake. This place felt like a “Cheers” pub on the water, where everyone knew each other’s name, or at least the owner and servers all tried to get to know everyone. Nothing pretentious, just good-natured fun, food and drinks.

The real reason to head to the Patio at Glenn Burney Lodge is to dig into their impressive menu. Choosing between ribs and a burger, a bartender and the owner both recommended the burger. It is a multi-animal, juicy and messy meal, but it was beyond delicious. 45-day dry aged beef, along with pork belly and some bacon added on plus the usual trimmings made for a filling meal.

As the days get shorter in autumn, the patio stays open so you can linger around for sunsets while also enjoying some Trestle Brewing Company beers, which they have on tap! 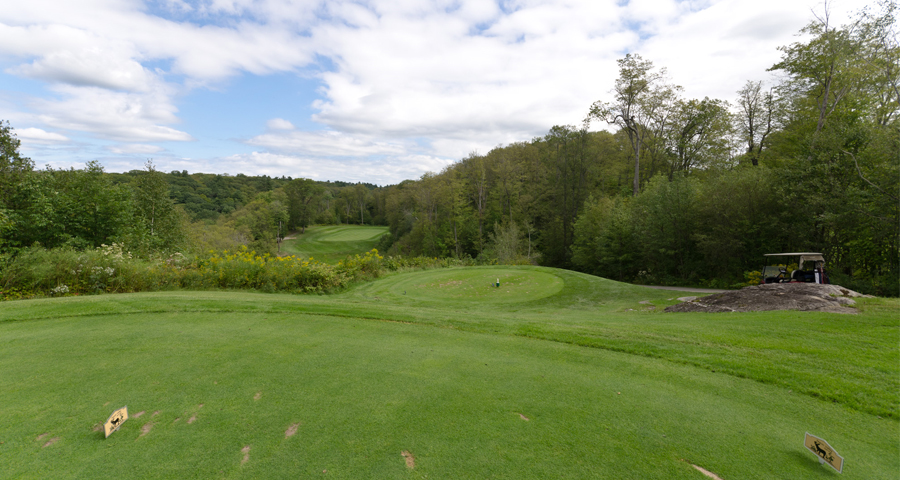 A cold beer overlooking the 18th green – sounds great, right? Golf + beer is a great combo, made even better at Seguin Valley Golf Club because you can stay and play by booking one of their cabins. The course is a short drive from either Trestle or Norse breweries, and offers a cottage country cabin experience, with a lot of extra comforts.

The course itself is going to test and surprise you, so you’re going to want to stick around for at least a second round. Stay & Play is a great option therefore. There are three cabins that are all nicely-appointed and each has a great water view. Campfires, full kitchens and complete privacy make the cabins a special way to turn a golf game into a golf retreat.

The biggest surprise about this course? It is massive! We’re talking about 400 acres set aside for the course itself, which is just a portion of the property. No need to worry about wayward shots careening into your fairway, as the holes here are so spread out. 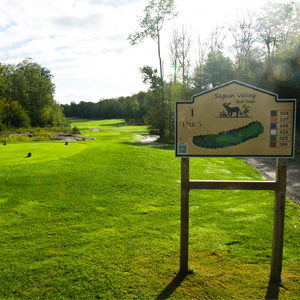 The terrain here is used beautifully to mold the contours of the fairways and greens, which were rated a 9.5 on my visit. Really, this course is so beautiful, they should charge the public a fee and let them walk or hike along the cart paths, it is that impressive.

While the course can be tough, it plays well to any skill level. If you only get a few games in a year, or if you’re a scratch golfer, you will enjoy this course. After losing four balls after the first two holes, things settled down for me. Be sure to grab the handy course booklet, which provides an overview of each hole, including suggestions on where to lay up, or hazards that you might be blind to. It will definitely save you a few strokes!

Hole 7 is an iconic island green, with a dangerous slope near the water, so don’t come up short. A favourite from my round was Hole 15, which didn’t have nearly as much elevation change as many holes, but really showcased the natural landscapes beautifully. We also spotted some bear scat near the cart path here, but sadly no bear. Not something we tend to see on courses further south! Speaking of which, don’t be overly surprised if you do come across a moose, bear, wild turkey or other wildlife wandering around on the course.

With up to six tee markers per hole, the course can play as long as 6795 yards. If you’re an average golfer stick to the white tees on your first round, then maybe return for a round from the blues. For me, the course yielded only one birdie, on the 18th, so I was left wondering what could have been if I played another round.

If you haven’t heard of Seguin Valley Golf Club, then you haven’t been reading much golf news this year. It made the Top 100 list of best courses in Canada on the 2018 list from SCOREGolf. A well-deserved accolade. 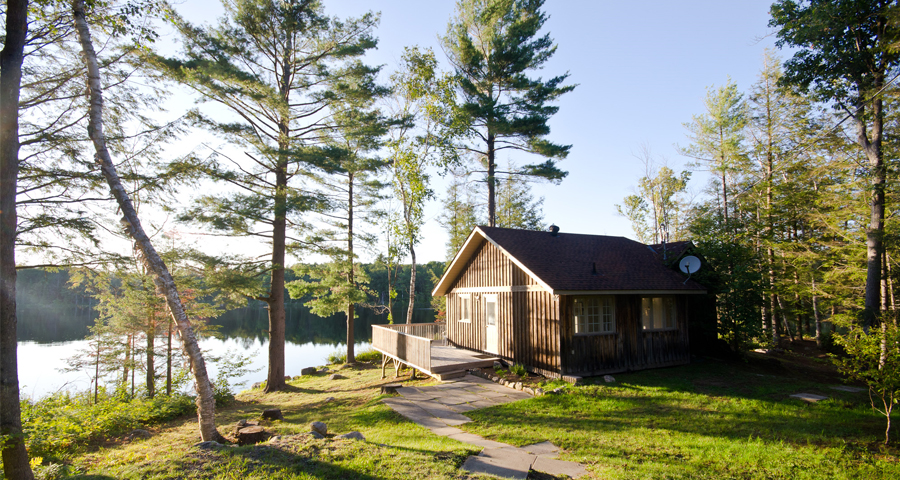 I really enjoyed my trip for pints and putts in Parry Sound and I absolutely recommend you add it to your list of destinations to visit in 2019.