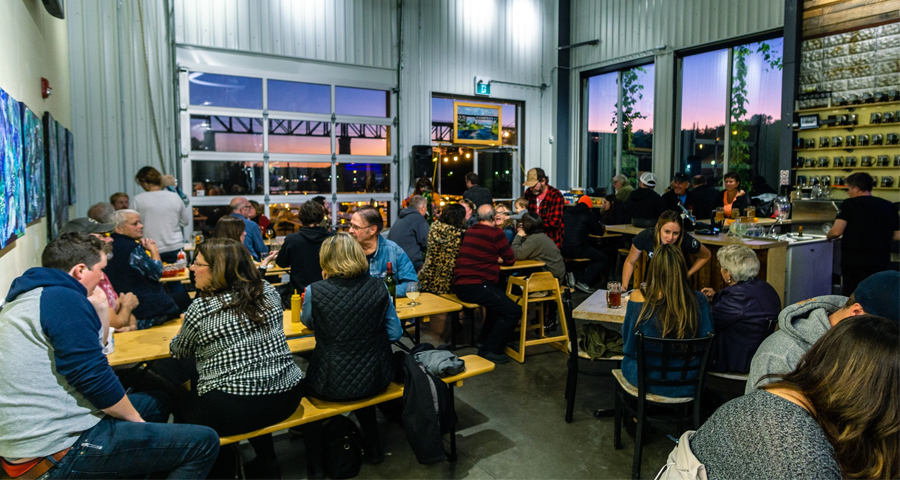 The winter season transforms our landscape to showcase frozen lakes, snow dusted treetops, and crisp, fresh air that opens up a whole new world of outdoor adventure. It also means cozy sweaters, hearty meals, and delicious new brews rolling out of your favourite Cottage Country Beer Trail breweries. Read on below to learn about what’s new to try, what events are happening this winter, and a few helpful hints for gift giving this holiday. 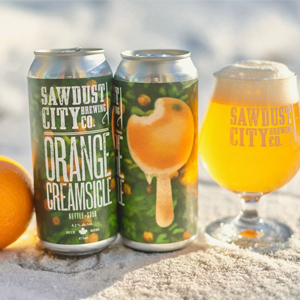 If you just can’t think of the holidays without thinking about tucking into an entire crate of clementines, then you must be a kindred spirit of Sawdust City Brewing Co. because they have seriously got you covered this winter. With two new creations featuring the sweet little fruit you’ll want to save space in the fridge – or the snowbank – for a few of these. The Orange Creamsicle Kettle-Sour (pictured left) is a delightfully light alternative to the traditional heavy brews often enjoyed at this time of year. It’s an easy drinker and with its hits of orange and clementine gives a nod to the mimosa – meaning yes, it makes a great breakfast brew (just sayin’…). If you’re into stouts, then don’t miss their Sweeties & Cuties Clementine Table Stout too. It combines the flavours of chocolate and orange into one delicious brew that’s fresh and rich.

A little more north in South River you’ll find Highlander Brew Co. and their recently bottled (check out the video on their Twitter feed here) Winter Imperial Stout. With hints of cinnamon, ginger and orange and a 10% ABV you can be sure it will keep you nice and toasty. This brew is a special limited release and each bottle is hand numbered, so be sure to stop into the brewery ASAP to pick one up before they’re gone for good. You can enjoy it now, or allow it to age for up to 10 years in a cool, dark place – it’s a new holiday game we’re calling willpower.

In Parry Sound, Trestle Brewing Company has been toying with some aged brews as well, and recently unveiled their Firewood Bourbon Barrel Aged Imperial Stout. This special creation has been waiting for its big reveal for over a year – aging inside eight bourbon barrels that arrived from Kentucky last October. It’s 10.5% ABV with flavours of chocolate and coffee, with hints of oak, bourbon and vanilla peeking through from the barrel. And if you want something to impress your friends and family with this holiday season, bring them a few cans of Grinch Tears Key Lime Gose. It’s an easy drinking brew that will pair perfectly with your next outdoor adventure, and is sure to make your heart grow three sizes too.

At Muskoka Brewery, you’ll want to hit the taproom (or your local LCBO) to try Middle of Noir. This Blackcurrant Berliner Weisse is a beautiful red violet colour and offers a perfectly tart flavour that is well rounded and delicious. Or go full on festive with a Yule Be Home For Christmas. Part of their Moonlight Kettle Series, this brew is available in the taproom for the month of December. It’s a Juleol Norwegian and is the last in the series for 2019 – be sure to stop by soon to have one of their helpful staff pour you a pint before it’s too late.

Want to use some of your favourite beer trail brews to craft your own cocktails? Lake of Bays Brewing Company has you covered. Grab a can of their Red Sky at Night Peach Cranberry Radler and mix with 4oz. of cranberry juice, 4oz. of orange juice and some frozen cranberries to act as your ice cubes and you’ve got your own Holiday Cranberry Shandy. 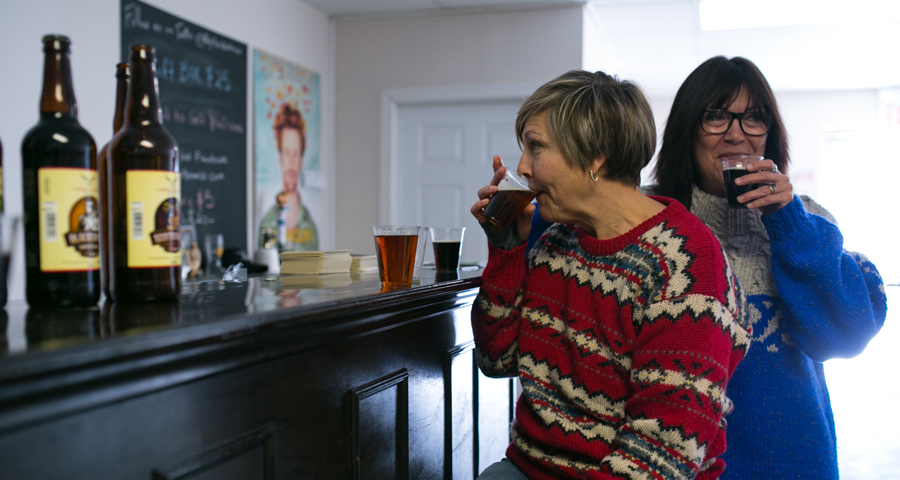 Peruse this list of some of the fun events happening this winter, and be sure to keep your eye on each brewery website for updates, inclusions and ongoing events like open mic nights, trivia nights and brewery brunches.

THE GIFT OF CRAFT BEER AND WINE 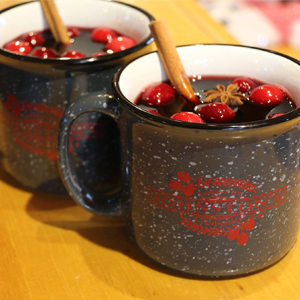 If you’ll be giving the gift of craft beer this winter, look no further than the breweries along the Cottage Country Beer Trail. Highlander Brew Co. in South River is offering Highlander Gift Packs this season which come in three options and include beer, swag and even the Highlander Cookbook! You can pick up some unique merch at Boshkung Brewing Co. (they have ‘half pint’ baby onesies!), beer soap from Haliburton Highlands Brewing or give the gift of time together with a trip to Muskoka Lakes Farm & Winery for some hot mulled wine, a trip around their ice trail, a game of ice hockey on their bog rinks, or a tour of the property on one of their daily Bog to Bottle Discovery Tours.

Hoping to travel this summer? Why not book a tour with Muskoka Craft Brewery Tours (who will be your guide AND do all the driving!) and give the gift of fun. Choose from a lunch or dinner tour, and visit Lake of Bays Brewery, Muskoka Brewery, Clear Lake Brewery and Sawdust City Brewing Co. with them when the snow melts – tours open for the 2020 season in April. Book your tour before January 31, 2020 and enter promo code ‘tastethebest’ when booking for a little savings too! And if you’re not sure what dates work for you yet, they have gift certificates available to make your life a little easier.

Or if you’re feeling lucky, why not try to win your gifts with Muskoka Brewery’s 12 Days of Giveaways. Follow along on their Facebook page for instructions on how to enter each day. 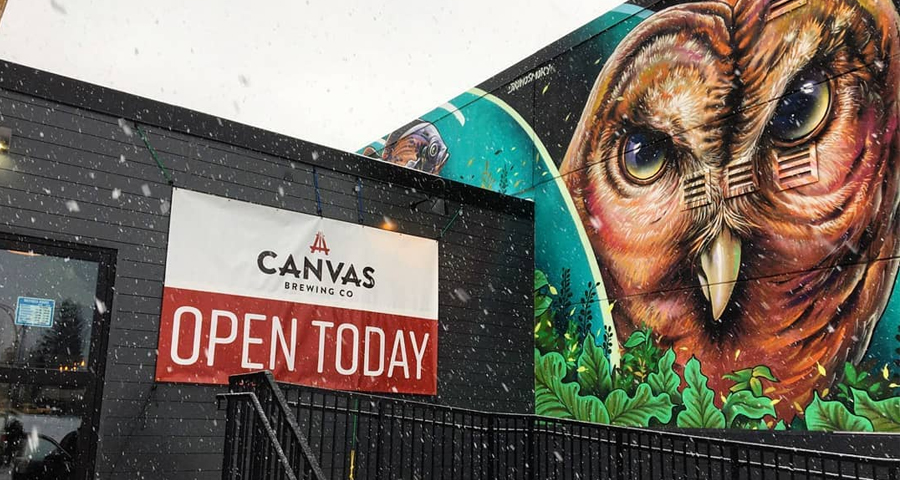 The newest brewery to swing open their doors in cottage country is Canvas Brewing Co. in Huntsville, ON. Look for the building adorned with the stunning hand painted murals next to the river downtown at 12 John Street. They’ll be open Tuesday to Saturday this winter pouring their flagship brew, Canvas Kolsch. It’s a German-inspired lagered ale with a sweet, malty aroma and flavour that finishes dry with a subtle hint of hops. And keep an eye on their Facebook page to follow along as more progress continues to be made inside and outside the new building, with two outdoor patios set to open this summer.

They’ll be live music happening this winter and special events too – including a New Year’s Eve party on December 31st – so stop by to support this new brewery and be one of the first to enjoy an ice cold Canvas Kolsch poured right from the source.